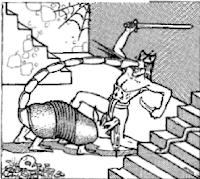 "I greet you with the heartiest and most welcoming salutations, good traveller! I surmise by the wagon out in front of this esteemed establishment - The White Roc Inn - you are here on your way to Mickleby to ply your wares at the bazaar. Well now, pull up a stool, order up whatever libation shall whet thy palette, and we shall trade stories about the goings on here in our fair country of Arduin.

"Oh, come now, you know that was a jest. Evil has always lurked the wastelands since before either of us were sired ... yet these are dark days, are they not? If the nomadic Skorpoons tribes don't get you in the King's Plain, the Manticore Lords of the mountains will carry away your horses as you ride them! To think that my granddad worried about Uruk-Hai and Dragons - HA! Those were the days, eh?

"I don't expect you have much to say about Oxhaven; pleasant little town. Not much ever happens there ... Oh? You say the summer rain storms are flooding the fields with a reddish hue? Yes, the weather has been strange this season, but not as strange as from where I hail ... Green clouds that belch fire - not lightning, mindest thou, but streams of fire in the early mornings. That's what folks in Talismonde have for breakfast! HA!

"Some greybeards mutter that it all steams from the Plateau of Forever that looms over the city like a snoring giant ... that some otherworldly gate there has been left open ... but then, that's been said for every strange happenstance about the land. That legend has been tossed around for quite some time, but there's never been any proof of a hellish gate of blackened stone anywhere near the Plateau. I should know, I've been there.

"It all comes down to the meddlers in magic, shouldest thou ask me. Too many of them frolicking here and lo across these lands. More Black Grimiores have been unearthed in tombs and cities best left lost to the world than a Gnome can pilfer a lockbox full of gems. Some magic is okay, like that which warmed your coffee this morning; but when you have as much of it hurled willy-nilly by so many young fools these days ... as if it were the only means for them to feel useful ... it's bad for the planet, knowest thou?"

I finished my whisky and decided to leave the old timers to gossip. Old Exador of Talismonde was well known in these parts as a spreader of rumors - otherwise known as a Bard of some renowned. Trouble was, he was often as right as he was wrong. I grabbed my swords from the barkeep and headed for the door, but overheard one last thing ...

"... And Elves from the Mistwoods are warning all travellers to pay heed or blood, that demons are loose in the forest. Damnable Elves probably set them loose on purpose ..."

Damn. It just might be a long journey to the Hidden Mountain from here ...