Major Tribes of Arduin and the Frontier 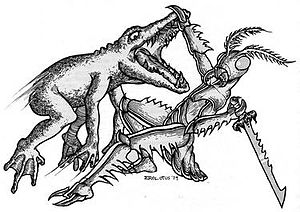 The majority of modern day Arduinian humans can, with some effort - as many records were lost in some great cataclysm long ago; trace their bloodlines to the Nexus and are of Atlantean stock, culture, and traditions. Amazon Bloodlines are also traced to the Nexus. Very few bloodlines can be traced to True Arduinian Human Stock, and those that can are usually of noble birth.

Elves, on the other hand, are Ancient Arduin natives, as are Dwarves, Gnomes, Fey and such. They have a deeper connection to the land and its magical and sometimes chaotic ways.

Other Arduin Natives exist along the frontier in considerable numbers and cannot and should not be ignored. Listed below are some of the largest groups and tribes that populate Arduin and the Frontier:

Roo-Anai – The Throon, large blue-black skinned, four armed men, are primarily found at the Mountains of Madness. They are quite savage and have been known to devour their captives. They are not particularly expansionists, but they are very territorial. It is thought that the subtle mind altering affects of the mountains that they call home, which are themselves a mystery, keeps them within their territory but also adds to their primal fury in combat.

Uruk Hai – This Orc Tribe is probably the most feared of all. Physically speaking, The Uruk Hai are paragons of Orcdom. They hate nearly everything that does not derive from Orcish Blood and will go out of their way to punish or destroy that which is not Orcish.

Phraints – Not exactly a barbaric people, the Phraints, however, are not above raiding parties, if such actions have logic to them and their continued survival. As a culture, they are stoic and unwavering, considering all things Phaintish to be superior to all others. Phraints do deal with other cultures, such as Humans, and view them as inferior little makers of wondrous things.

Hawkmen – Various tribes of Hawkmen may be found in the mountains of all of Arduin. Generally, they are concerned in their own matters and only hunt or raid other settlements, if you could call it a raid, in search of prey. They are a secretive people, but have been known to venture forth with Adventuring Parties in need of mountainous guides.

Blue Barbarians – Of all the Tribes listed here, with the possible exception of The Uruk Hai, The Blue Barbarians are the biggest threat to the Kingdom, raiding frontier towns on a regular basis. There hasn’t been a Hoard gathered in many years, but they are due to gather in great numbers again, should a charismatic leader come forth.

Saurigs – Of the two types of Saurig, the Desert Saurig are the most plentiful in the wastelands of Arduin, such as the King’s Plain and The Creep – both of which this sage shall detail in a latter day post. The Clans of the Claw are a loose collective of tribes throughout the Kingdom, all of which prize prowess in battle above all other skills. This warlike attitude has brought them into conflicts with The Kingdom’s Knights, but these skirmishes never last long.

Centaurs – Populating various woodland and grassland areas, and in not so rare occasions, the Wastelands; the various races of Centaurs are generally a nomadic people, never settling anywhere for more than a season. They are fierce and deadly warriors in battle, but are generally a benevolent people, trading with various tribes throughout Arduin.
Scribed by JMiskimen at 6:59 PM