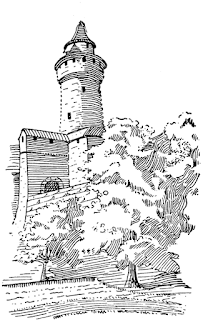 Modern day Talismonde is the City of Kings and the city that almost wasn’t. Contrary to contemporary belief, the location of this grand city may have originally been in the far east of the country of Arduin. Sages have uncovered texts that seem to describe a great catastrophe that triggered a mass exodus of beings to the western coastline. These same sages surmise that the Grand Ruins of Arduin may include the remains of the original Talismonde as well as other settlements.

Whatever the hypothetical ancient history, modern day Talismonde is a bustling hub of activity with every manner of enterprise imaginable. The King and Queen of Arduin, His Majesty Olinthar and Her Grace Cassidia, rule their Kingdom with wisdom and benevolence. Many Guilds conduct and regulate free trade in the city among its many craftsmen, and no place flourishes more than the Grand Bazaar. The City Watch does its best to uphold the Law of the Land, and this is no small task, for a city of this size also attracts darker elements, most notoriously, The Brotherhood of the Rope – a powerful faction of organized crime.

Complicating the matter greatly for the City Watch is The Nexus. This Gateway to the Multiverse brings in anyone from everywhere imaginable. The Nexus is constantly guarded by the watch and regulated through The Multiversal Trading Company – to bring orderly passage to and from Arduin as a whole. The MTC also regulates what goods brought through the portal are considered safe and what goods are considered contraband.

The Nexus is not entirely unique in Arduin, in that there are several documented multiversal gateways spread throughout the land; however the location of these doorways are a State secret and not divulged to the general populace. One popularly rumored location is atop the Plateau of Forever, which looms over the city like a sleeping giant; however no such gate has been discovered there.

Assisting the City Watch in areas of illegal spellcasting and all things arcane is The Hermetic Order of Wizardry, the most powerful Guild of Spellcasters in the Kingdom. The Guildhouse for this enigmatic Order floats nearby the Royal Castle and is popularly known as Mageholm. The Order is thought to keep a smaller Nexus within its walls that the Magi use for academic purposes, but the Hermetic Order swears its members to secrecy concerning what goes on in Mageholm. Wizard business is strictly for Guild Magi.

Talismonde has no standing army, but supports a sizeable militia which may be called upon in times of crisis.

Several Noble houses are present in Talismonde, each with their own luxurious Manor Houses and/or Keeps within the City. Most notable are The Archom’s, The Alabaanth’s, The Mar-Galen’s, The Naskillion’s, The Pyrosa’s, The Rokkanon’s, The Varlusian’s, and The Wandering’s. Each of these families boast several Knight Protectors of the City, and when not questing, can be called upon to lead the Militia.

Of keen interest to Adventuring Companies are the many Taverns and Inns boasted by the City. Two of the most popular sites include The Black Pearl, located Dockside, and the Benevolent Basilisk, located near the West Gate. Both have bountiful menus of both food and drink, and hold some of the finest minstrels and bards on Sarmaht and Qwain evenings.
Scribed by JMiskimen at 12:24 PM